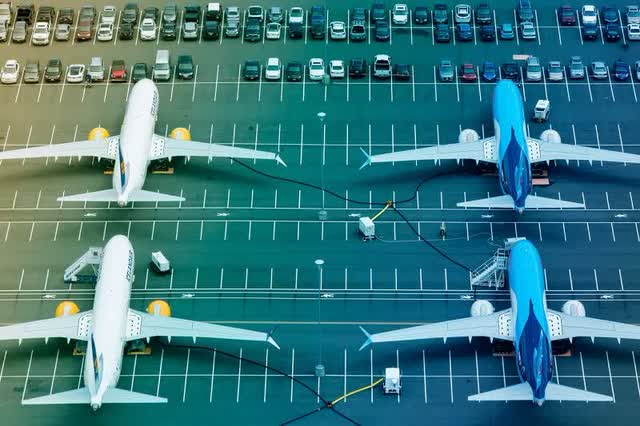 General Electric’s (NYSE:GE) stock has been on a tear of late. Since its Q3 earnings report, the stock has bounced over 40%. The company has gained a bevy of bulls on Wall Street betting GE will benefit from a rebound in the economy. Management recently announced more job cuts in its key Aviation segment:

General Electric has warned employees that more job cuts are coming to its jet engine business despite the promise of a COVID-19 vaccine on the horizon, WSJ reports, citing an internal video message.

More jobs will be lost but the cuts will be more focused than two rounds of layoffs earlier this year that ultimately eliminated 25% of the division’s 52K global employees, new GE Aviation boss John Slattery reportedly said, without specifying the number of jobs that would be cut.

“The business revenue and profit projections not only for this year but next year and the year after are fundamentally lower than what we originally budgeted or expected,” Slattery said. “Overall, particularly in our commercial sector, we’ll be a smaller business and our cost structure simply must align.”

Aviation was expected to be a moat that could help GE rebound from missteps at Power. COVID-19 tripped up Aviation in Q1 when the unit reported a double-digit percentage decline in revenue. Management slashed jobs in response to the free fall in global passenger demand and uncertainty over when the pandemic will end. Jobs cuts at Aviation would have previously been considered anathema by GE bulls.

I have been bearish on the global economy for years. I felt GE’s industrial operations (“Industrial”) were subjected to vagaries of the global economy and it too would tumble. Aviation’s commercial segment was particularly vulnerable. My logic went that if consumers were not optimistic about the future, then they would cut out unnecessary travel, hurting commercial aviation and aircraft orders. The pandemic has led to shelter-in-place policies, punishing global passenger demand. The pandemic proved that even GE’s vaunted Aviation unit was not untouchable. 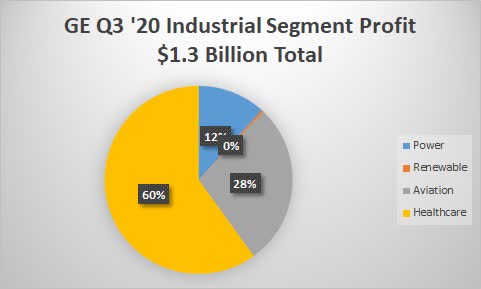 Healthcare’s segment profit dwarfed that of Aviation; Aviation’s 7% segment profit margin was on par with Industrial’s blended profit margin of 7%. This implied that Aviation was no longer the catalyst GE bulls once thought. If management can wring out costs, while stabilizing revenue, it could markedly improve margins and cash flow.

Heading into GE’s Q3 earnings, certain Wall Street analysts implied GE’s Industrial businesses could pick up once the economy reopened. And right on cue, Pfizer (PFE) announced its vaccine was highly effective at treating COVID-19. The news drove GE and broader markets higher on hopes of an economic rebound. Now GE has to deliver. It would look odd if GE reported another sharp decline in revenue and segment profit in Q4. Wringing costs out of Aviation could potentially justify the huge run up in the stock.

How Long Will It Take For Aviation To Rebound?

Business activity should rebound after the economy reopens. Investors are likely rushing into stocks so they do not miss another leg up in broader markets. GE’s Industrial assets should also benefit. The question remains, “How long will it take for Aviation to rebound?” A proxy for Aviation’s prospects could be global passenger demand. Data from the International Air Travel Association suggested air travel demand hit a wall in September:

“We have hit a wall in the industry’s recovery,” states IATA director general Alexandre de Juniac today. “A resurgence in Covid-19 outbreaks – particularly in Europe and the US – combined with governments’ reliance on the blunt instrument of quarantine in the absence of globally aligned testing regimes, has halted momentum toward re-opening borders to travel.”

Amid that bleak assessment, domestic passenger levels showed some month-on-month improvement in September – at a 43.3% year-on-year reduction in revenue passenger kilometres (RPKs), versus a 50.7% decline in August – mainly driven by the Chinese and Russian markets.

Vaccines could be widely distributed in Q1 2021, yet social distancing policies will still be in effect. That means air travel may not show sustainable improvement until the second half of 2021. According to Boston Consulting Group, travel may not rebound to 2019 levels until 2023 or 2024:

Clearer skies may be ahead in 2021, but that’s relative. Boston Consulting Group predicts that travel won’t rebound to 2019 levels until 2023 or 2024. So Guggenheim is likely to be just as busy next year-and the following, and the following.

That’s because the tourism business is driven by the great intangible of consumer confidence. Regardless of therapeutics or vaccine availability, second or third waves, or the efficacy of safety protocols, the industry won’t fully recover until travelers and service providers do so psychologically. Even then, the industry varies greatly, ranging from the already booming roadside hotel sector to unable-to-operate cruise lines.

Ultimately, consumer confidence will drive air travel, which will likely drive orders for GE’s aircraft engines. The economy was slowing prior to the pandemic. Whether consumers will be optimistic about the future remains to be seen. Buyers of commercial aircraft like Boeing (BA) or FedEx (FDX) may not book new orders until their own businesses show a sustainable improvement.

GE’s aircraft engine orders declined over 20% in Q3. I anticipate a lag between (1) when global passenger demand shows sustainable improvement and (2) when customers increase new orders. It could take years for the decline in GE’s aircraft engine orders to abate. This portends Aviation revenue could face headwinds through 2021. Whether GE bulls have priced in a prolonged recovery for Aviation into the stock remains to be seen.

A noticeable recovery at Aviation could take longer than expected. This scenario may not be priced into the stock. GE remains a hold.

I also run the Shocking The Street investment service as part of the Seeking Alpha Marketplace. You will get access to exclusive ideas from Shocking The Street, and stay abreast of opportunities months before the market becomes aware of them. I am currently offering a two-week free trial period for subscribers to enjoy. Check out the service and find out first-hand why other subscribers appear to be two steps ahead of the market.

Pricing for Shocking The Street is $35 per month. Those who sign up for the yearly plan will enjoy a price of $280 per year – a 33% discount.

Disclosure: I am/we are long GE. I wrote this article myself, and it expresses my own opinions. I am not receiving compensation for it (other than from Seeking Alpha). I have no business relationship with any company whose stock is mentioned in this article.